After arriving in Port Said, ‘Abdu’l-Bahá had initially planned to continue immediately to Europe, but His poor health forced him to stay in Port Said it for a month. While there, he asked Siyyid Asadu'llah-i-Qumi: Do you realize now the meaning of my statement when I was telling the friends that there was a wisdom in my indisposition? The wisdom was that I must always move according to the requirements of the Cause. After the month in Port Said, ‘Abdu’l-Bahá, as He had in Haifa, suddenly and without warning, boarded a ship bound for Europe. His cruise, however, was very short because His health forced him back on shore at Alexandria, on the other side of the Nile Delta.

Leaving Buffalo, the train passed Niagara Falls and went through green fields and forested hills, but by noon the train was becoming crowded and very Hot. The heat made ‘Abdu’l-Bahá very weary; He said, "The friends in America expect Me to visit each city. How would this be possible? It is impossible to sit in the train every day from morning until afternoon; the body cannot stand it."

Shortly after his arrival ‘Abdu’l-Bahá met the Rev. R. J. Campbell of the City Temple, together with the editor of the Christian Commonwealth newspaper. The editor noted that when Rev. Campbell entered the room, ‘Abdu’l-Bahá rose from his chair and advanced to meet him, with smiling face and arms extended. The older men grasped both the hands of the younger and, retaining them, warmly greeted him  Standing face-to-face, linked hand-in-hand, in the center of the room, these two spiritual leaders of worldwide fame, - Eastern and Western, but essentially one in their outlook on life - formed an impressive picture. During the conversation, Rev. Campbell said: "I should like you to visit the City Temple", to which ‘Abdu’l-Bahá responded, saying, "I should like to come. I know that the City Temple is the center of progress in the religious world, and seeks to promote the universal understanding." Just a few days later, on Sunday, 10 September, ‘Abdu’l-Bahá arrived at the City Temple during the evening service to give His first public address in the Western world. "The visit was kept secret", wrote Wellesley Tudor-Pole, but the congregation was as usual very large, probably well over 2000  ‘Abdu’l-Bahá then spoke animatedly for about nine minutes, in Persian, in full, vibrant tones, wrote Tutor-Pole. And the whole congregation was held spellbound  After the Master finished speaking, Wellesley Tudor-Pole read the English translation of his speech . . . After the service, ‘Abdu’l-Bahá wrote the following in the pulpit Bible: this book is the Holy Book of God, of celestial Inspiration. It is the Bible of Salvation, the Noble Gospel. It is the Mystery of the Kingdom and its light. It is the Divine Bounty, the sign of the guidance of God. ‘Abdu’l-Bahá 'Abbás.

Sydney Sprague was on pilgrimage in Haifa in September 1910. One afternoon, ‘Abdu’l-Bahá, visited with Mr. Sprague in the other pilgrims. Everything seemed normal. But that evening, as usual, the believers gathered before the house of ‘Abdu’l-Bahá to receive the blessing, which every day is ours, of being in his presence, but we waited in vain, for one of the sons-in-law came and told us that ‘Abdu’l-Bahá had taken the Khedivial steamer to Port Said. Sprague wrote from Haifa: I have a very big piece of news to tell you. ‘Abdu’l-Bahá has left this Holy Spot for the first time in forty-two years, and has gone to Egypt . . . Everyone was astounded to hear of ‘Abdu’l-Bahá's departure, for no one knew until the very last minute that he had any idea of leaving . . . After 42 years in this cage, the Divine Bird has spread His wings and in perfect freedom flown away. When asked about his abrupt departure, ‘Abdu’l-Bahá's attendant, Siyyid Asadu’llah-i-Qumi, wrote: ‘Abdu’l-Bahá did not inform anyone that he was going to leave Haifa. The day he left he visited the holy tomb of the Báb on Mt Carmel and when he came down from the mountain of the Lord, he went direct to the steamer. This was the first anyone knew about the matter.

While on pilgrimage in Haifa in 1909, Alice Breed asked ‘Abdu’l-Bahá: if we build the Temple (the American House of Worship) quickly and send a ship for You, will You come to America? Qbdul-Bahá responded: I will come of my own volition to America if they build the Mashriqu'l Adhkar quickly. But (sadly, and very gently) they will not build it quickly. Then in April of 1911, ‘Abdu’l-Bahá wrote the American Bahá’ís: if the friends and the maid-servants of the Merciful long for the visit of ‘Abdu’l-Bahá, they must immediately remove from their midst differences of opinion and be engaged in the practice of infinite love and unity...if ye are yearning for my meeting, and if in reality ye are seeking my visit, ye must close the doors of differences, and open the gates of affection, love and friendship . . . Verily, verily, I say unto you, were it not for this difference among you, the inhabitants of America . . . would have, by now, been attracted to the Kingdom of God . . . Is it meet that you sacrifice this most glorious bounty for worthless imaginations?

‘Abdu’l-Bahá was released from prison in 1908 because of the revolt of the Young Turks against the Ottoman Emperor ‘Abdu’l-Hamid. Almost immediately, Western believers began petitioning Him to visit their countries. The Americans, in particular, were eager for ‘Abdu’l-Bahá to visit their shores, but he made it plain that he would not visit there until the Bahá’í community was united.

After morning tea, the Master instructed that telegrams be sent to the Assemblies in both the East and the West informing the believers of His safe arrival. Then He said: “No one thought at the time of our departure from Ramleh that this voyage would be so enjoyable, that the great ocean would be crossed so easily and that my health would withstand the voyage in such manner!” One of the companions remarked that the confirmation of the Abhá Kingdom is ever with the Supporter of the Covenant and that all the people on the ship had remarked that the great ocean had never been so calm at this time of the year. 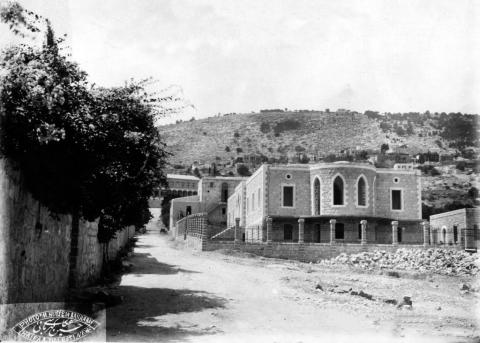