A major event during the Master's visit to America was the dedication of the land for the first Bahá’í House of Worship of the western hemisphere in Wilmette, Illinois. Mrs. Nettie Tobin lived nearby in Chicago and was anxious to contribute something, despite the fact that she was not well off. The following is her account of how she solved the problem. 'I had heard that the Master was to be at the Temple site on May first, and I thought that He should have a suitable stone to makrk the location of the Temple. So I went to a building under construction near my home, and seeing a pile of stones at a wall, I asked the builder if I could get a stone. He said, "Sure, help yourself, these are rejected." So I went home, got an old, small, baby carriage, loaded the stone into it and wheeled it home. Early the next morning, with the help of a Persian friend, I wheeled the carriage to the car line, and against the protests of the conductor, we got the carriage onto the platform of the car. We made two changes and finally, after endless delays, we got the baby carriaage to the corner of Central Street and Sheridan Road. Here, when we pushed the carriage over a broken pavement it collapsed. As we stood despairing of getting the stone to the Temple grounds in time, since the hour had passed for the service, two boys with an express wagon came along. The boys were quickly persuaded to lend their wagon for the transportation and so we finally came to the grounds. Imagine my joy when "the stone refused by the builder" was received and used by the Master!

Honnold, Annamarie, Vignettes from the Life of ‘Abdu’l-Bahá, p. 42

During ‘Abdu’l-Bahá’s last days in America, the Bahá’ís were eager to show their love and gratitude by contributions of money, but these He refused. ‘I am pleased with your services,’ He told them, ‘and I am grateful for all you have done for Me. Now you have brought presents for the members of My family. They are acceptable, but the best of all presents is the love of God which remains preserved in the treasuries of hearts. Material presents remain for a time but this lasts forever. These presents require chests and shelves for safe keeping while this is preserved in the repositories of the minds and hearts and remains eternal and immortal forever in the divine worlds. I shall, therefore, convey to them your love which is the most precious of all gifts. No one uses diamond rings in our homes and no one wants rubies. That house is free from all these things. ‘I, however, accept your presents but I leave them in your safe keeping with the request that you will kindly sell them and send the proceeds to the funds for the Mashriqu’l-Adhkar.’

Honnold, Annamarie, Vignettes from the Life of ‘Abdu’l-Bahá

One striking fact that ‘Abdu’l-Bahá never asked for donations, and even refused to accept money or any costly gifts that were offered to Him. One day in my presence a lady said to Him: "I have here a cheque from a friend, who begs its acceptance to buy a good motor-car for your work in England and Europe." The Master replied: "I accept with grateful thanks the gift of your friend." He took the cheque into both His hands, as though blessing it, and said "I return it to be used for gifts to the poor." "We have never seen the like before. Surely such deeds are very rare,: it was whispered amongst the friends.

Rene and her mother had a private interview with the Master. Rene made a special basket filled with flowers to give to ‘Abdu’l-Bahá. When He appeared at the door for their interview, Rene ran down the hall and into His outstretched arms. Rene learned a lesson about true giving that day when she saw another young girl leaving ‘Abdu’l-Bahá's room with her special basket. At first, Rene was upset because of all the love she had put into making the basket, but when she Thought about it, she realized what the true meaning of giving was.

There was a pilgrim from the United States, a Mrs.True, the American Bahá’ís who are here, of course, remember her very well. One of the early of the Cause and one of the great workers for the Bahá’í temple, and one of the great pillars of the Cause, and she is now a Hand of the Cause. She leaves the Guardian; she’s ninety-five years old, and of course the Guardian was very pleased that she had come at that age. And they talked about the early days of the Cause, and what the Master had said, what she had done for the Master, and so on. One evening he came over and said, “Now, Mrs. True, I have a gift for you tonight.” She was quite excited, of course. Being elderly, and a little bit non-plussed as to what to do, he reached down and took it out of his coat pocket and said, “This is a purse which ‘Abdu’l-Bahá used, and I know you’ll treasure it and because it’s from him.” And she thanked him, and was quite excited about it. And he said, why don’t you open it and see what’s in it? So she started to open it and fumbling around and he said, “Let me open it for you.” She’s looking in and says, now what’s there? “It’s a gold piece, she said. So he says, “Now just take it out and look at it.” So she took it out and looked at it. And he said, “Now, what’s the date of it, Mrs. True?” She looked at it and said, “1906.” He said, “That’s the date of your first visit to the Holy Land to visit ‘Abdu’l-Bahá. And this was a gold coin, which ‘Abdu’l-Bahá had.” Well, now, think of that tenderness. With all of the weight that he had on his shoulders, with all of the problems that he had to meet, that he would think of those things, that he would think of this purse, that he would think of that gold piece, and he would think of her first visit in 1906.

Throughout his journey through the West, ‘Abdu’l-Bahá steadfastly refused to accept money or expensive gifts from anyone, though he greatly enjoyed small gifts such as a box of bon-bons, fruit or flowers. In this scene reenacted time after time on his travels, Lady Blomfield writes of one attempt to give money to ‘Abdu’l-Bahá: "One day in my presence a lady said to Him: I have here a check from a friend, who begs its acceptance to buy a good motorcar for your work in England and Europe." The Master replied: "I accept with grateful thanks the gift of your friend." He took the check into both his hands, as though blessing it, and said "I return it to be used for gifts to the poor." 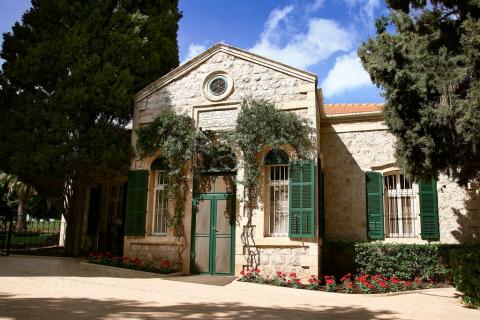