It took some time for the news of Bahá’u’lláh’s Declaration to reach the believers in Persia. In the first place, methods of communication were still primitive. Secondly, the dissemination of such important news had to be carried out with wisdom. Only the insight and devotion of Bahá’u’lláh’s disciples could bring this about, which is one of the reasons that Bahá’u’lláh sent a number of the ablest among them to Persia to teach His Cause there.

The Master, as He was now called, shielded His adored Father in all ways that lay in His power from undesirable intruders, from the world's insistence, and from those who merely wanted idly to see and to hear something new. He made the arrangements for the Beloved One to go to the Ridvan garden, there to abide until the family should have been able to make preparations for the departure.

Whilst He tarried in the Ridvan, the appointed time had arrived for the momentous proclamation. Bahá’u’lláh confided to the eldest son, `Abbas, the Master, that He Himself was "He Whom God shall make Manifest," heralded by the Forerunner, the Báb. As the Master heard the soul-stirring words, and realized that His own beloved Father was He Who should educate mankind in universal conceptions, abolish prejudices, bring unity and the most Great Peace into the distracted world, establish the Kingdom of God upon this sad earth, by making religion again a healing spring for all woes of the world, He understood why the Manifestation had once again become the cause of evil men's hatred and malignant persecution.

As these things were pondered by the Master, His mind, well-endowed with a peculiar receptiveness that was inborn, and strengthened by the education given to Him by His Father, saw, as in a radiant vision, the world of the future, when the divine Message, having become known and comprehended by "men of goodwill," would change the heart of the world, and the Kingdom where God's will shall be done on earth - for which we have been praying for nigh two thousand years - would be established.

Henceforth a new joy and increased devotion to His Father, Bahá’u’lláh (The Glory of God) took possession of Him. He consecrated Himself, body and soul and spirit, to the sacred work of the Bahá’í Cause, spreading abroad the new message of Love and Justice, that message which His Holiness the Lord Christ had brought to man, and which mad had grown to disregard, forgetting his loyalty to the Lord of Compassion, and, as of old, worshipping the Golden Calf.

From the time when the declaration was made to him at Baghdad Abbas Effendi seemed to constitute himself the special attendant, servant, and body-guard of his father. He guarded him day and night on this journey, riding by his wagon and watching near his tent. He thus had little sleep, and, being young, became extremely weary. His horse was Arab and very fine, and so wild and spirited that no other man could mount him, but under my brother's hand as gentle and docile as a lamb. In order to get a little rest, he adopted the plan of riding swiftly a considerable distance ahead of the caravan, when, dismounting and causing his horse to lie down, he would throw himself on the ground and place his head on his horse's neck. So he would sleep until the cavalcade came up, when his horse would awake him by a kick and he would remount. 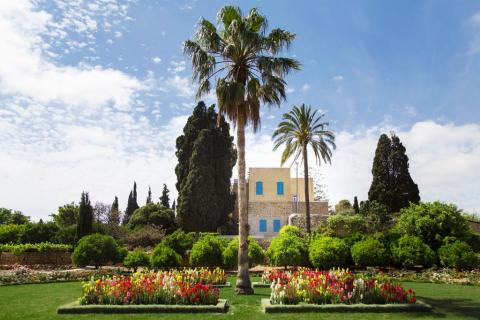