Over a hundred guests had come to welcome the Master. Florence's mother Alice Breed had baked Him a birthday cake with sixty-eight candles, and to symbolize universality and the love many bore Him then and would in increasing numbers bear Him down the ages, had decorated it with tiny flags of the United States, Persia and England. Her first cake fell and she had to bake another. This may have produced a number of stories we have often heard but could never verify. It is reported that of a failed cake, whose creator told Him she had used her prayer book while preparing it, the Master responded, 'You should have used your cook book instead.' We like the anecdote but somehow it does not sound like the Master to us, and we are fairly sure it did not happen in the present case. Significantly, He did not stay for the festivities. He forgave this time, but had forbidden the celebration of His birthday. Six years before He had told Khan and other pilgrims that besides Naw-Ruz (New Day) the Holy Days were only for the Báb and Bahá’u’lláh, that His birth on the twenty-second/twenty-third of May (the Bahá’í day begins at sunset) was 'only a coincidence', and now in His address He spoke only of the Báb's Declaration on this day, saying not a word about Himself. Afterward, Alice persuaded Him to step into the dining room and at least see the festive table and the cake, and take a little refreshment. He sat in the large, brocaded 'grandfather' chair but soon left.

On ‘Abdu’l-Bahá's birthday, 23 May, over 100 guests were at Francis Breeds home in Cambridge to celebrate the event. Alice Breed, the mother-in-law of Ali-Kuli Khan: Had baked Him a birthday cake with 68 candles, and to symbolize universality and the love many bore Him . . . had decorated it with tiny flags of the United States, Persia and England. Her first cake fell and she had to bake another . . . Significantly, He did not stay for the festivities. He forgave this time, but had forbidden the celebration of his birthday.

While the Master was in Boston, the Bahá’ís arranged a magnificent feast to commemorate the Declaration of the Báb as well as the birthday of ‘Abdu’l-Bahá on May 23rd. They were in a state of utmost happiness and joy to have ‘Abdu’l-Bahá in their midst for these two significant occasions to be held at the home of Mrs. Alice Breed.

Earlier that day the Master had gone to the town of Worcester, located about 50 miles from Boston. There He spoke to more than one thousand university students, faculty and others. Upon returning to Boston in the automobile especially provided for Him by the chancellor, the Master went directly to the home of Mrs. Alice Breed to join the friends in their commemoration of the Declaration of the Báb.

When ‘Abdu’l-Bahá arrived, He rested for awhile and then joined the gathering of the friends, illuminating the meeting with His presence. With joyful and shining faces, all eyes were directed towards the Master. The freshness and verdure of that gathering was like a flower garden and was proof that the Tree of the Cause of God has been firmly rooted in American soil and that it has produced leaves and blossoms of the utmost beauty.

The Master spoke briefly about the greenery of the surrounding countryside, the magnificence of the city of Boston, as well as the university. He then gave an account of the life of the Báb that gladdened the hearts and cheered the souls.

While tea, drinks and sweets were being served in another room Mrs. Breed brought before the Master a birthday cake with 68 candles, representing His age. At her request, He lit the first candle and then each of the friends in turn lit a candle, each person like a moth burning with the fire of love. When the cake was cut, each guest took a slice as a sacred relic.

Mrs. Breed, indeed, lit the candle of servitude and steadfastness that evening and, in doing so, became the recipient of bounty from ‘Abdu’l-Bahá's presence. 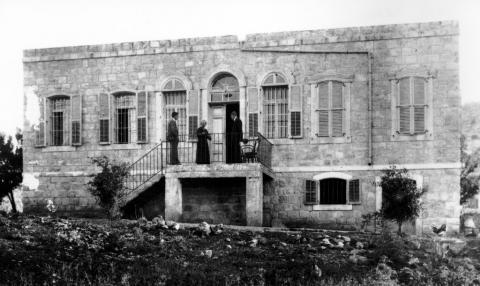